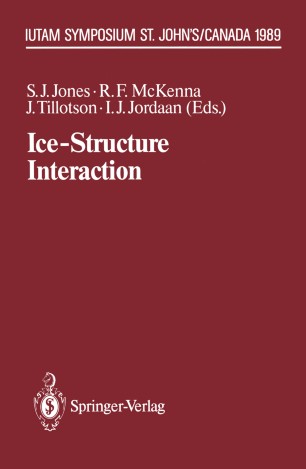 IUTAM-IAHR Symposium on Ice-Structure Interaction Professor Bez Tabarrok, Chairman of the Canadian National Committee (CNC) of the International Union of Theoretical and Applied Mechanics (IUTAM) invited Professor Derek Muggeridge to organize a symposium on ice structure interaction. Dr. Muggeridge readily agreed and prepared a proposal that was endorsed by the CNC and presented to the General Assembly Meeting of IUTAM for their consideration. This Assembly gave its approval and provided the local organizing committee with the names of individuals who were willing to serve on the Scientific Committee. Dr. Muggeridge became chairman of this committee and Dr. Ian Jordaan became co-chairman of this committee as well as chairman of the local organizing committee. The symposium followed the very successful previous meeting, chaired by Professor P. Tryde in Copenhagen, by ten years. Both symposia uti­ lized Springer-Verlag to publish their proceedings. The Faculty of En­ gineering and Applied Science at Memorial University of Newfoundland were particul{lXly pleased to host this prestigious symposium as it marked the twentieth anniversary of its Ocean Engineering Research Centre.