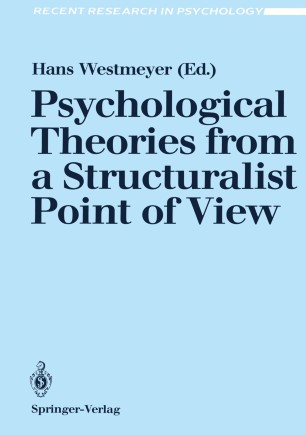 Psychological Theories from a Structuralist Point of View

Metatheoretical and, more generally, methodological analyses of psychological problems and theories have a long tradition; however, their impact on scientific practice, especially on the clarification and testing of existing psychological theories and the formulation of new ones, has so far been less than spectacular. The increased interest in theoretical psychology visible during the past ten or twenty years is associated with the hope that a change of this situation will gradually be effected. Thus, in their preface to the proceedings of the founding conference of The International Society for Theoretical Psychology, Baker et al. (1987, pp. Vf)1 take up 2 once more the objectives of a theoretical psychology formulated by Koch already in 1951: (a) Education in the methodology and logic of science. (b) Analysis of methodological or foundational problems that are more or less unique to psychology. . .. (c) Internal systematization of suggestive, but formally defective, theoretical formulations. (d) Intertranslation and differential analysis of conflicting theoretical formulations. ( e) Construction of new theory. Reflecting on possible reasons for the relative inefficacy so far of methodological and metatheoretical analyses in psychology, it seems to me that the following two have been of prime importance: (1) Many of the existing analyses are at best tenuously connected to concrete existing psychological theories, i.e., they deal with their subject matter in a too abstract, detached way. This detracts from the persuasive power which their results might otherwise have, and impedes the realization of these results within scientific practice.