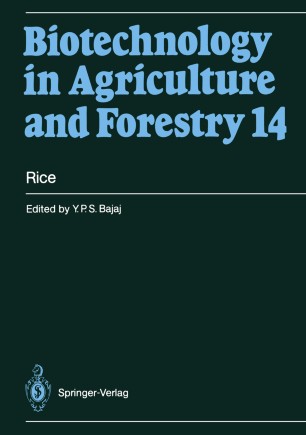 Part of the Biotechnology in Agriculture and Forestry book series (AGRICULTURE, volume 14)

Rice is the most important cereal crop which feeds more than half the population of the world. It is being grown in more than 144. 641 million ha with a production of over 468. 275 million tons (in 1988). Rice is attacked by a large number of pests and diseases which cause an enormous loss in its yield. Therefore, the major objectives in rice breeding are the development of disease resistance, tolerance to insects, adverse soil water, and drought; and improvement of quality including increased protein content. Tremendous efforts being made at the International Rice Research Institute have resulted in the release of improved varieties. It is estimated that the world's annual rice production must increase from 460 million tons (in 1987) to 560 million tons by the year 2000, and to 760 million tons by 2020 (a 65% increase) in order to keep up with the population growth (IRRI Rice Facts 1988). To achieve this gigantic goal, new strategies have to be evolved. Since the success of any crop improvement program de­ pends on the extent of genetic variability in the base population, new techniques need to be developed not only to generate the much needed variability but also for its conservation. In this regard the progress made in the biotechnology of rice during the last 5 years has amply demonstrated the immense value of innovative approaches for further improvement of this crop.