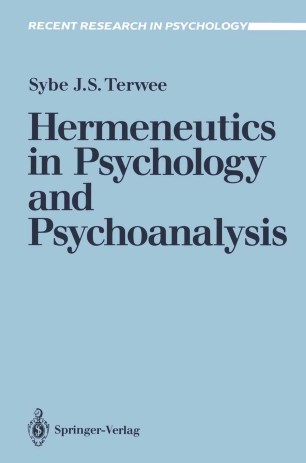 Hermeneutics in Psychology and Psychoanalysis

In the chapters which follow, I will discuss various subjects from a theoretical-psychological perspective. Though the discussion will not be restricted to a single discipline, but ranges from experimental psychology to psychoanalysis, in each case the focus of attention is the scientific status of the theories scrutinized. Earlier versions of four of the chapters have been published elsewhere. Chapter 1, "Psychology and Philosophy of Science", is an expanded version of a Dutch paper written for Van Strien and Van Rappard's volume on the foundations of psychology, Grondvragen van de Psychologie. Chapter 2, "The Early Reception of Psychoanalysis", has appeared in an almost identical form in Bem and Rappard's (1988) volume, Studies in the History of the Social Sciences 5. Chapter 3, "The Case of Johannes Linschoten's Apostasy: Phenomenological versus Empiri­ cal-Analytical Psychology", is an elaboration of the Dutch article, "Het essentialisme van Johannes Linschoten", published in Psychologie en Maatschappij in 1987. The substance of this chapter is considerably different from the earlier paper. Chapter 4, "Rhetorical Analysis and the Question of Relativism", was published in essentially the same form in a volume edited by W. Baker et aI, Recent Trends in Theoretical Psychology (1988). It is based on an exchange of arguments with Kenneth J. Gergen at the 1987 meeting of the International Society for Theoretical Psychology in Banff, Canada.