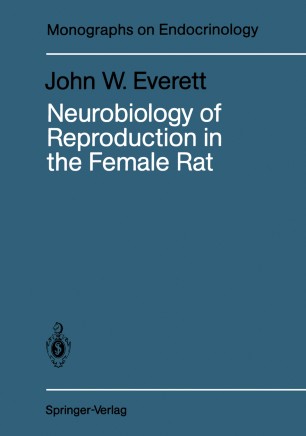 Neurobiology of Reproduction in the Female Rat

Part of the Monographs on Endocrinology book series (ENDOCRINOLOGY, volume 32)

It has been my privilege and pleasure during the past half century to participate in the unfolding of present-day concepts of the mammalian female reproductive cycles. When the studies recorded here began in the late 1930s it was already established that cyclic ovarian function is governed by gonadotropic secretions from the anterior pituitary gland, the "conductor of the endrocrine orchestra," and that in turn this activity is importantly dependent in some way upon secretion of estro­ gens and progesterone by the ovaries. Although a role of the nervous system was recognized for the reflex-like induction of ovulation in rabbits and cats and the in­ duction of pseudopregnancy in rats and mice, and although there was even some evidence of neural participation in ovulation in rats, a major central neural role in the female cycle of most species was not apparent. Gonadotropic fractions of pitui­ tary extracts having distinct follicle-stimulating and luteinizing activities in test ani­ mals had been obtained, and these respective effects had been fairly well charac­ terized. Prolactin was well known for its lactogenic activity, but its luteotropic role in rats and mice had yet to be revealed. The molecular structure of the several estro­ gens and progesterone was known, and they were readily available as synthetic pro­ ducts. The broad concept of ovarian-pituitary reciprocity appeared to be an accept­ able explanation of the female cycle, with the ovary in control through the rhythmic rise and fall in secretion of follicular estrogen.