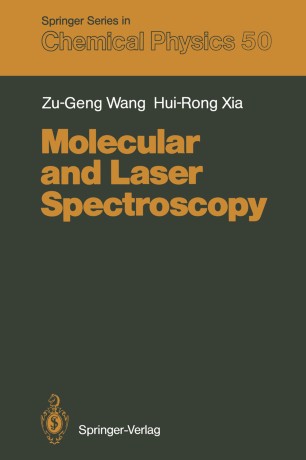 The spectra of molecules containing more than one atom are necessarily of single atoms. They are correspondingly much more complex than those richer, not only in the number of spectral lines, but also in qualitatively different phenomena which do not have any counterpart in single atoms. Historically, molecular spectra have revealed much fundamental phy­ sics, such as the connection between nuclear spin statistics. They have pro­ vided models of physical systems which have been useful in quite different areas, such as particle physics. Most especially, molecular spectra are of fundamental importance in understanding chemical bonding. They reveal not only bond lengths but also the strength of the bonding potential between atoms. Moreover, these measurements are obtained for electronic excited states, as well as for the ground state, and for unstable short-lived molecules. In recent years, tunable lasers have provided powerful tools for the measurement and analysis of molecular spectra. Even before that, molecules were being used in lasers, most notably in the carbon dioxide laser, which finds many industrial applications.