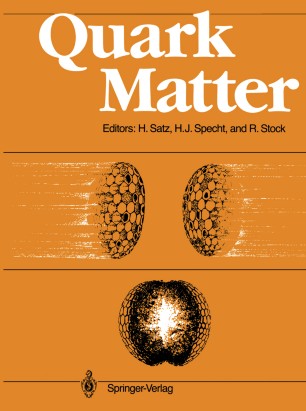 From the Editors Preface: "Quark Matter 1987 was attended by about 250 scientists, representing 75 research institutions around the world - the scientific community engaged in experimental and theoretical studies of high energy nuclear collisions. The central theme of the meeting was the possibility of achieving extreme energy densities in extended systems of strongly interacting matter - with the ultimate aim of creating in the laboratory a deconfined state of matter, a state in which quarks and gluons attain the active degrees of freedom. High energy accelerator beams and cosmic radiation projectiles provide the experimental tools for this endeavour; on the theoretical side, it is intimately connected to recent developments in the non-perturbative study of quantum chromodynamics. Phase transitions between hadronic matter and quark-gluon plasma are of basic interest also for our understanding of the dynamics of the early universe ... A very special feature of this Sixth Quark Matter Conference was the advent of the first experimental results from dedicated accelerator studies. These were conducted during 1986/87 at the AGS of Brookhaven National Laboratory ... and at the CERN SPS ... An intense discussion of these data formed the main activity of the meeting.