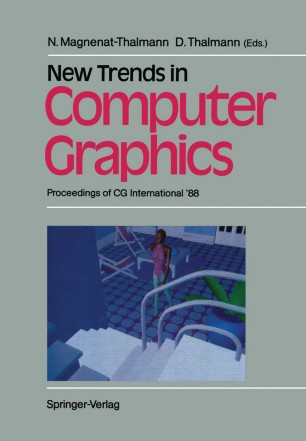 New Trends in Computer Graphics contains a selection of research papers submitted to Computer Graphics International '88 (COl '88). COl '88 is the Official Annual Conference of the Computer Graphics Society. Since 1982, this conference ha~ been held in Tokyo. This year, it is taking place in Geneva, Switzerland. In 1989, it will be held in Leeds, U. K. , in 1990 in Singapore, in 1991 in U. S. A. and in 1992 in Montreal, Canada. Over 100 papers were submitted to CGI '88 and 61 papers were selected by the International Program Committee. Papers have been grouped into 6 chapters. The flrst chapter is dedicated to Computer Animation because it deals with all topics presented in the other chapters. Several animation systems are described as well as speciflc subjects like 3D character animation, quaternions and splines. The second chapter is dedicated to papers on Image Synthesis, il1 particular new shading models and new algorithms for ray tracing are presented. Chapter 3 presents several algorithms for geometric modeling and new techniques for the creation and manipulation of curves, surfaces and solids and their applications to CAD. In Chapter 4, an important topic is presented: the specification of graphics systems and images using l~nguages and user-interfaces. The last two chapters are devoted to applications in sciences, medicine, engineering, art and business.