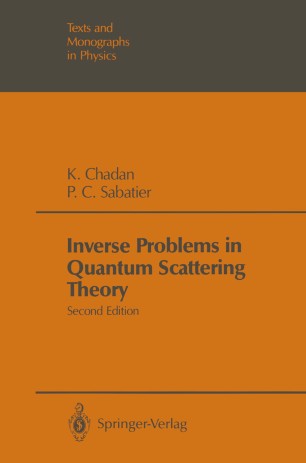 The normal business of physicists may be schematically thought of as predic­ ting the motions of particles on the basis of known forces, or the propagation of radiation on the basis of a known constitution of matter. The inverse problem is to conclude what the forces or constitutions are on the basis of the observed motion. A large part of our sensory contact with the world around us depends on an intuitive solution of such an inverse problem: We infer the shape, size, and surface texture of external objects from their scattering and absorption of light as detected by our eyes. When we use scattering experiments to learn the size or shape of particles, or the forces they exert upon each other, the nature of the problem is similar, if more refined. The kinematics, the equations of motion, are usually assumed to be known. It is the forces that are sought, and how they vary from point to point. As with so many other physical ideas, the first one we know of to have touched upon the kind of inverse problem discussed in this book was Lord Rayleigh (1877). In the course of describing the vibrations of strings of variable density he briefly discusses the possibility of inferring the density distribution from the frequencies of vibration. This passage may be regarded as a precursor of the mathematical study of the inverse spectral problem some seventy years later.