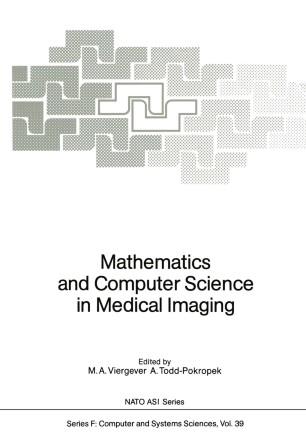 Medical imaging is an important and rapidly expanding area in medical science. Many of the methods employed are essentially digital, for example computerized tomography, and the subject has become increasingly influenced by develop­ ments in both mathematics and computer science. The mathematical problems have been the concern of a relatively small group of scientists, consisting mainly of applied mathematicians and theoretical physicists. Their efforts have led to workable algorithms for most imaging modalities. However, neither the fundamentals, nor the limitations and disadvantages of these algorithms are known to a sufficient degree to the physicists, engineers and physicians trying to implement these methods. It seems both timely and important to try to bridge this gap. This book summarizes the proceedings of a NATO Advanced Study Institute, on these topics, that was held in the mountains of Tuscany for two weeks in the late summer of 1986. At another (quite different) earlier meeting on medical imaging, the authors noted that each of the speakers had given, there, a long introduction in their general area, stated that they did not have time to discuss the details of the new work, but proceeded to show lots of clinical results, while excluding any mathematics associated with the area.