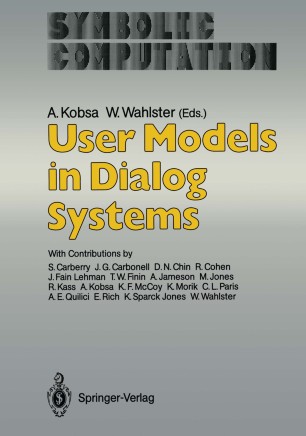 User models have recently attracted much research interest in the field of artificial intelligence dialog systems. It has become evident that flexible user-oriented dialog behavior of such systems can be achieved only if the system has access to a model of the user containing assumptions about his/her background knowledge as well as his/her goals and plans in consulting the system. Research in the field of user models investigates how such assumptions can be automatically created, represented and exploited by the system in the course of an "on-line" interaction with the user. The communication medium in this interaction need not necessarily be a natural language, such as English or German. Formal interaction languages are also permit­ ted. The emphasis is placed on systems with natural language input and output, however. A dozen major and several more minor user modeling systems have been de­ signed and implemented in the last decade, mostly in the context of natural-language dialog systems. The goal of UM86, the first international workshop on user model­ ing, was to bring together the researchers working on these projects so that results could be discussed and analyzed, and hopefully general insights be found, that could prove useful for future research. The meeting took place in Maria Laach, a small village some 40 miles south of Bonn, West Germany. 25 prominent researchers were invited to participate.