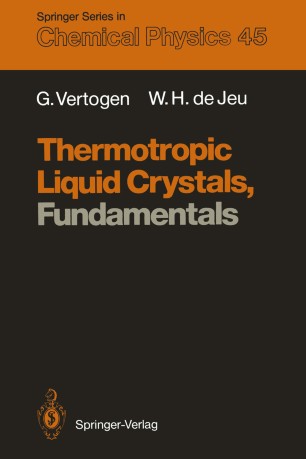 The aim of this book is to give a unified and critical account of the fundamental aspects of liquid crystals. Preference is given to discussing the assumptions made in developing theories and analyzing experimental data rather than to attempting to compile all the latest results. The book has four parts. Part I is quite descriptive in character and gives a general overview of the various liquid crystalline phases. Part II deals with the macroscopic continuum theory of liquid crystals and gives a systematic development of the theory from a tensorial point of view thus emphasizing the relevant symmetries. Part III concentrates on experiments that provide microscopic information on the orientational behaviour of the molecules. Finally Part IV discusses the theory of the various phases and their attendant phase transitions from both a Landau and a molecular-statistical point of view. Simplifying the various models as far as possible, it critically examines the merits of a molecular-statistical approach.