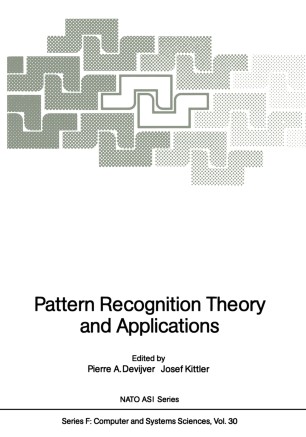 This book is the outcome of a NATO Advanced Study Institute on Pattern Recog­ nition Theory and Applications held in Spa-Balmoral, Belgium, in June 1986. This Institute was the third of a series which started in 1975 in Bandol, France, at the initia­ tive of Professors K. S. Fu and A. Whinston, and continued in 1981 in Oxford, UK, with Professors K. S. Fu, J. Kittler and L. -F. Pau as directors. As early as in 1981, plans were made to pursue the series in about 1986 and possibly in Belgium, with Professor K. S. Fu and the present editors as directors. Unfortunately, Ie sort en decida autrement: Professor Fu passed away in the spring of 1985. His sudden death was an irreparable loss to the scientific community and to all those who knew him as an inspiring colleague, a teacher or a dear friend. Soon after, Josef Kittler and I decided to pay a small tribute to his memory by helping some of his plans to materialize. With the support of the NATO Scientific Affairs Division, the Institute became a reality. It was therefore but natural that the proceedings of the Institute be dedicated to him. The book contains most of the papers that were presented at the Institute. Papers are grouped along major themes which hopefully represent the major areas of contem­ porary research. These are: 1. Statistical methods and clustering techniques 2. Probabilistic relaxation techniques 3. From Markovian to connectionist models 4.