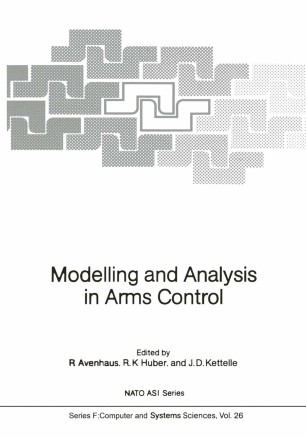 Modelling and Analysis in Arms Control

This book presents the results of an international workshop on Modelling and Analysis of Arms Control Problems held in Spitzingsee near Munich in October 1985 under the joint sponsorship of NATO's Scientific Affairs Division and the Volkswagen Foundation. The idea for this workshop evolved in 1983, as a consequence of discussions in the annual Systems Science Seminar at the Computer Science Department of the Federal Armed Forces University ~1unich on the topic of Quantitative Assessment in Arms Control 1) • There was wide agreement among the contribu­ tors to that seminar and its participants that those efforts to assess the potential contributions of systems and decision sciences, as well as systems analysis and"mathematical modelling, to arms control issues should be ex­ panded and a forum should be provided for this activity. It was further agreed that such a forum should include political scientists and policy analysts working in the area of arms control.