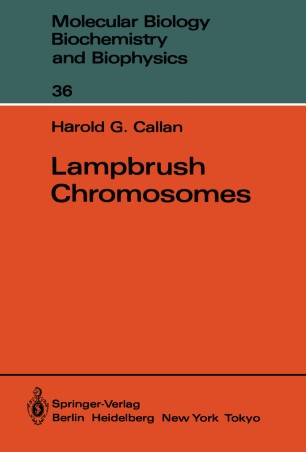 In 1965 I was asked by Dr. Konrad Springer whether I would consider writing a monograph on "Lampbrush chromosomes and their physiological meaning", and although I accepted in principle I refused to write there and then, or to meet a deadline. I wanted to continue with my own research, and I had other responsibilities that left me with little free time, but a much more important consideration was that in the 1960s the subject was beset by a host of unresolved questions. I felt that to write a review then would be premature, full of speculations many of which would be refuted, and indeed were refuted, within the next decade or two. Had I written at that time the only real advantage over the present would have been that few biologists were studying lampbrush chromo­ somes, and the published literature was therefore scanty. I am glad that I insisted on delay, and am grateful for Springer Verlag's patient acceptance of my decision. The first chapter of this monograph describes the history of research on lampbrush chromosomes from their discovery towards the end of the 19th century until the early 1960s. By then several facts concerning their structure and chemistry had been firmly established, including the evidence that a lampbrush chromatid is unineme; it contains a single uninterrupted DNA duplex. This exposed a major problem, the C-value paradox; grades of complexity of organization in eukaryotes are unrelated to their genome sizes.