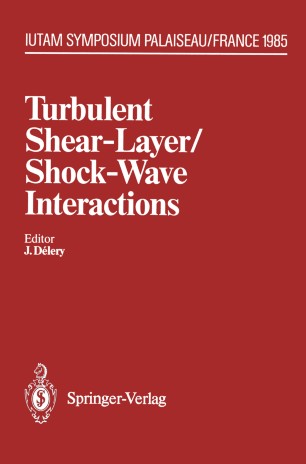 It was on a proposal of the late Professor Maurice Roy, member of the French Academy of Sciences, that in 1982, the General Assembly of the International Union of Theoretical and Applied Mechanics decided to sponsor a symposium on Turbulent Shear-Layer/Shock-Wave Interactions. This sympo­ sium might be arranged in Paris -or in its immediate vicinity-during the year 1985. Upon request of Professor Robert Legendre, member of the French Academy of Sciences, the organization of the symposium might be provided by the Office National d'Etudes et de Recherches Aerospatiales (ONERA). The request was very favorably received by Monsieur l'Ingenieur General Andre Auriol, then General Director of ONERA. The subject of interactions between shock-waves and turbulent dissipative layers is of considerable importance for many practical devices and has a wide range of engineering applications. Such phenomena occur almost inevitably in any transonic or supersonic flow and the subject has given rise to an important research effort since the advent of high speed fluid mechanics, more than forty years ago. However, with the coming of age of modern computers and the development of new sophisticated measurement techniques, considerable progress has been made in the field over the past fifteen years. The aim of the symposium was to provide an updated status of the research effort devoted to shear­ layer/shock-wave interactions and to present the most significant results obtained recently.