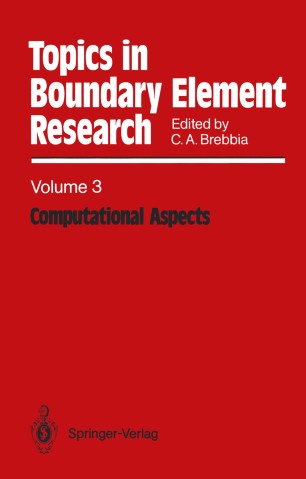 Past volumes of this series have concentrated on the theoretical and the more formal aspects of the boundary element method. The present book instead stresses the computational aspects of the technique and its applications with the objective of facilitating the implementation of BEM in the engineering industry and its better understanding in the teaching and research environments. The book starts by discussing the topics of convergence of solutions, application to nonlinear problems and numerical integration. This is followed by a long chapter on the computational aspects of the method, discussing the different numerical schemes and the way in which influence functions can be computed. Three separate chapters deal with important techniques which are related to classical boundary elements, namely the edge method, multigrid schemes and the complex variable boundary element approach. The last two chapters are of special interest as they present and explain in detail two FORTRAN codes which have numerous applications in engineering, i.e. a code for the solution of potential problems and another for elastostatics. Each sub­ routine in the programs is listed and explained. The codes follow the same format as the ones in the classical book "The Boundary Element Method for Engineers" (by C. A. Brebbia, Computational Mechanics Publications, first published in 1978) but are more advanced in terms of elements and capabilities. In particular the new listings deal with symmetry, linear elements for the two dimensional elasticity, some mixed type of boundary conditions and the treatment of infinite regions.