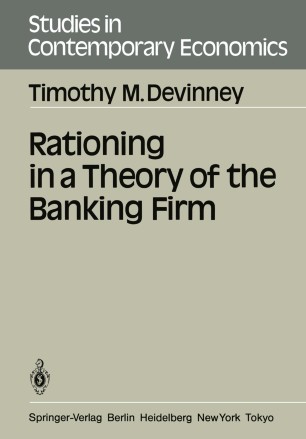 Rationing in a Theory of the Banking Firm

The existence of non-price rationing in credit markets is a subj ect, not only of paramount importance, but of considerable controversy, which is ultimately linked with our understanding, or lack thereof, of the basic nature of the banking firm. A recognition of this phenomenon is critical to the understanding of the banking firm in its major role as a financial intermediary. The banking firm serves as an intermediary in two important spheres, between borrower and lender, and between spenders and the monetary authorities. The basic economic formulation of borrower-lender behavior, the simple Fisherian consumption loan model, while beautiful in its simplicity, fail s to acknowledge any role for a non-neutral financial intermediary. The bank, in its second intermediary role, leads one to question the assumption of both neoclassical and Keynsian monetary theories that monetary changes are diffused across the economy (the proverbial monetary helicopter). Monetary policy effects on spending and investment will clearly be biased by the policies of the banks. The major focus of the present work is the development of a theory of credit rationing based upon the existence of risk reducing information technologies. Implicit in the analysis is a discussion of the role of the banking firm as something more than a tr·aditional financial intermediary. The present analysis will focus on the bank as an intermediary between borrower and lender. It will be shown that in .