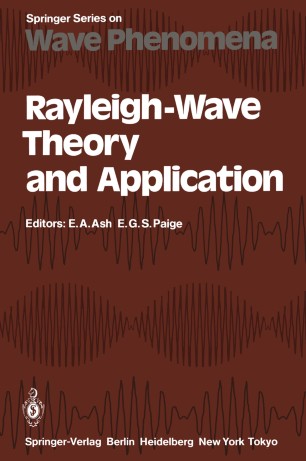 Proceedings of an International Symposium Organised by The Rank Prize Funds at The Royal Institution, London, 15–17 July, 1985

There is no respect for mere age in Science or Technology. Yet the cen­ tenary of the discovery, by the third Lord Rayleigh, that elastic waves can be guided by a surface, is memorable for the contradictions which it encompasses: Rayleigh's assessment of his classic 1885 paper as a rather minor mathematical development with a potential value only in seismology on the one hand; on the other the rediscovery of the subject in a totally that of electronic signal processing - which has led to its different fiel- explosive growth over the last twenty years. The new surface acoustic wave (SAW) devices have proved to be per­ electronic components. Today almost all television receivers con­ vasive tain one or more SAW filters, sophisticated radars depend on SAW signal processing, and SAW devices have been incorporated in ultra-high perfor­ mance opto-electronic systems. With the objective of surveying these developments and attempting to predict those that can be foreseen, as well as marking the centenary of Lord Rayleigh's discovery, The Rank Prize Funds' Committee for Opto­ Electronics organised a symposium in London, in July 1985. It was held in the Royal Institution, London, where Rayleigh himself once worked and often lectured. The present volume is the tangible outcome of the symposium, In which international experts survey.ed their various fields, and presented the most exciting recent developments.