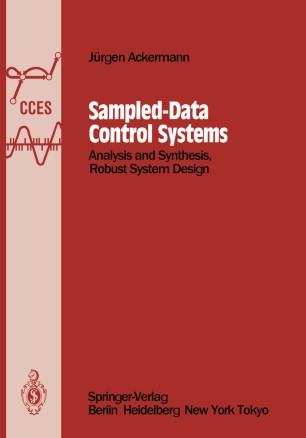 The first German edition of this book appeared in 1972, and in Polish translation in 1976. It covered the analysis and synthesis of sampled-data systems. The second German edition of 1983 ex­ tended the scope to design, in particular design for robustness of control system properties with respect to uncertainty of plant parameters. This book is a revised translation of the second Ger­ man edition. The revisions concern primarily a new treatment of the finite effect sequences and the use of nice numerical proper­ ties of Hessenberg forms. The introduction describes examples of sampled-data systems, in particular digital controllers, and analyzes the sampler and hold; also some design aspects are introduced. Chapter 2 reviews the modelling and analysis of continuous systems. Pole shifting is formulated as an affine mapping, here some n~w material on fixing some eigenvalues or some gains in a design step is included. Chapter 3 treats the analysis of sampled-data systems by state­ space and z-transform methods. This includes sections on inter­ sampling behavior, time-delay systems, absolute stability and non­ synchronous sampling. Chapter 4 treats controllability and reach­ ability of discrete-time systems, controllability regions for con­ strained inputs and the choice of the sampling interval primarily under controllability aspects. Chapter 5 deals with observability and constructability both from the discrete and continuous plant output. Full and reduced order observers are treated as well as disturbance observers.