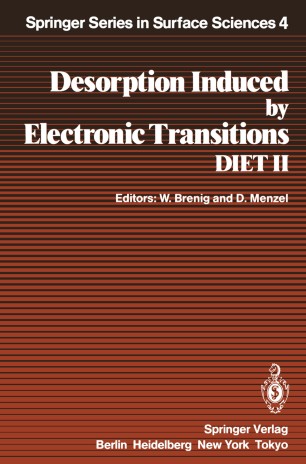 The second workshop on Desorption Induced by Electronic Transitions (DIET II) took place October 15-17, 1984, in SchloB Elmau, Bavaria. DIET II, fol­ lowing the great success of DIET I (edited by N. H. Tolk, M. M. Traum, J. C. Tully, T. E. Madey and published in Springer Ser. Chem. Phys. , Vol. 24), again brought together over 60 workers in this exciting field. The "hard co­ re of experts" was essentially the same as in DIET I but the general overlap of participants between the two meetings was small. While DIET I had the function of an exposition of the status of the field DIET II focussed more on new developments. The main emphasis was again on the microscopic under­ standing of DIET but a number of side aspects and the application of DIET ideas to other fields such as sputtering, laser-induced desorption, fractu­ re, erosion, etc. were considered, too. New mechanisms and new refined expe­ rimental techniques were proposed and discussed at the meeting critically but with great enthusiasm. In addition to the talks, there was a continuous poster exhibition which also stimulated extended and excited discussions. This book is a collection of papers summarizing the talks and posters presented at the meeting.