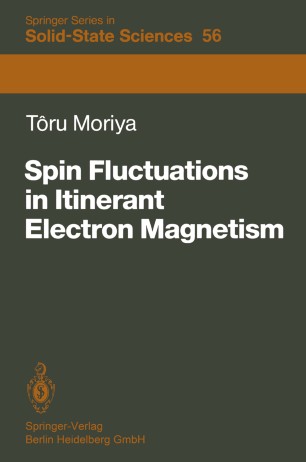 Ferromagnetism of metallic systems, especially those including transition metals, has been a controversial subject of modern science for a long time. This controversy sterns from the apparent dual character of the d-electrons responsible for magnetism in transition metals, i.e., they are itinerant elec­ trons described by band theory in their ground state, while at finite tem­ peratures they show various properties that have long been attributed to a system consisting of local magnetic moments. The most familiar example of these properties is the Curie-Weiss law of magnetic susceptibility obeyed by almost all ferromagnets above their Curie temperatures. At first the problem seemed to be centered around whether the d-elec­ trons themselves are localized or itinerant. This question was settled in the 1950s and early 1960s by various experimental investigations, in particular by observations of d-electron Fermi surfaces in ferromagnetic transition metals. These observations are generally consistent with the results of band calculations. Theoretical investigations since then have concentrated on explaining this dual character of d-electron systems, taking account of the effects of electron-electron correlations in the itinerant electron model. The problem in physical terms is to study the spin density fluctuati·ons, which are ne­ glected in the mean-field or one-electron theory, and their influence on the physical properties.