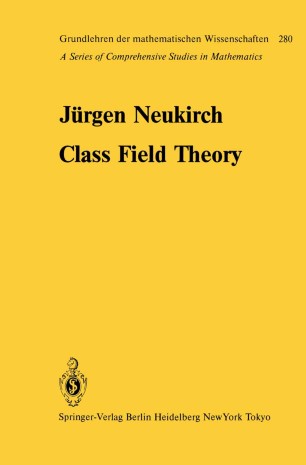 Class field theory, which is so immediately compelling in its main assertions, has, ever since its invention, suffered from the fact that its proofs have required a complicated and, by comparison with the results, rather imper­ spicuous system of arguments which have tended to jump around all over the place. My earlier presentation of the theory [41] has strengthened me in the belief that a highly elaborate mechanism, such as, for example, cohomol­ ogy, might not be adequate for a number-theoretical law admitting a very direct formulation, and that the truth of such a law must be susceptible to a far more immediate insight. I was determined to write the present, new account of class field theory by the discovery that, in fact, both the local and the global reciprocity laws may be subsumed under a purely group­ theoretical principle, admitting an entirely elementary description. This de­ scription makes possible a new foundation for the entire theory. The rapid advance to the main theorems of class field theory which results from this approach has made it possible to include in this volume the most important consequences and elaborations, and further related theories, with the excep­ tion of the cohomology version which I have this time excluded. This remains a significant variant, rich in application, but its principal results should be directly obtained from the material treated here.