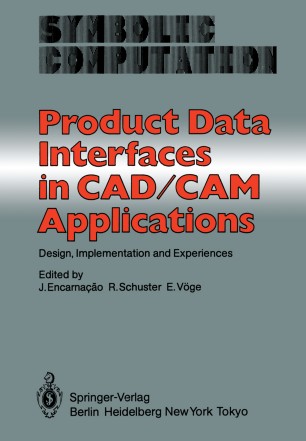 Interest in product data exchange and interfaces in the CAD/CAM area is steadi­ ly growing. The rapidly increasing graphics applications in engineering and sci­ ence has led to a great variety of heterogeneous hardware and software products. This has become a major obstacle in the progress of systems integration. To improve this situation CAD/CAM users have called for specification and imple­ mentation of standardized product data interfaces. These needs resulted in the definition of preliminary standards in this area. Since 1975 activities have been concentrated on developing standards for three major areas: - computer graphics, - sculptured surfaces, and - data exchange for engineering drawings. The Graphical Kernel System (GKS) has been accepted as an international standard for graphics programming in 1984, Y14.26M (IGES) was adopted as an American Standard in 1981 and the VDA Surface Interface (VDAFS) has been accepted by the German National Standardization Institute (DIN NAM 96.4). Although considerable progress has been achieved, the complexity of the subject and the dynamics of the CAD/CAM-development still calls for more generality and compatibility of the interfaces. This has resulted in an inter­ national discussion on further improvements of the standards. The major goal of this book is to bring together the different views and experiences in industry and university in the area of Product Data Interfaces, thereby contributing to the ongoing work in improving the state of the art.