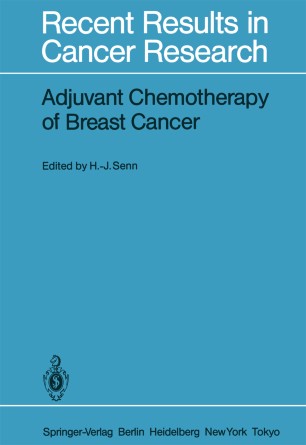 H.-J. Senn Adjuvant Chemotherapy (ACT) of breast cancer has now emerged as one of the controversial su):>jects in clinical and also experimental oncology. Driven by growing frustration about stagnating cure rates in breast cancer [1,4] and stimulated by elegant demonstration of highly curative effects of adjuvant systemic therapy in animal models [6, 11] and in several childhood neoplasias [15], researchers introduced ACT to the primary treatment of breast cancer with great hope some 15 years ago. After a first wave of isolated "historic" trials with generally limited but in one case remarkable success [5, 9], a second generation of ACT studies was initiated by NSABP investigators and oncology centers in Europe [2, 6, 13]. These trials were well conducted statistically and diagnostically, and all in the early 1970s included a surgical control arm. Early and intermediate beneficial effects on relapse-free survival (RFS) after 2-3 years median observation time then prompted a whole series of ACT studies in breast cancer. These "third-gener­ ation" studies usually regarded some positive influence of ACT as a given fact, dropping surgical control regimens and comparing different ACT regimens, hopefully in a prospective, randomized way 1984 Fig. 1. The mushrooming of adjuvant studies in breast cancer XII Introduction [reviews in 3, 14]. The "mushrooming" of ACT studies in breast cancer during the last 10 and especially 5 years is demonstrated in Fig. 1, and it gets really cumbersome even for the insider to keep on top of the multitude of sometimes conflicting data.