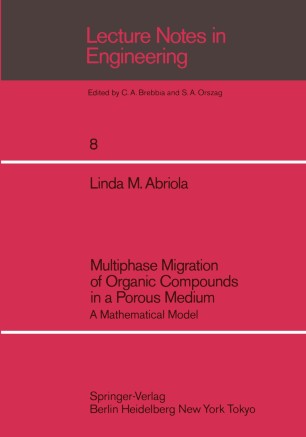 Multiphase Migration of Organic Compounds in a Porous Medium

Groundwater has long been one of the world's most important resources. It accounts for approximately 96% of all fresh water in the United States and supplies more than 50% of the population with potable water. Historically, this water source has generally been regarded as pristine. However, in recent years, contamination of ground water by industrial products has become a problem of growing concern. During the past four decades, the variety and quantity of organic chemicals produced in the U. S. has steadily increased. Currently, more than 40,000 different organic compounds are being manufactured, trans­ ported, used and eventually disposed of in the environment (Wilson, et !l (1981». Production and consumption of petroleum products has also risen in this same time period. Many of these industrial compounds are highly toxic and slightly water soluble. Thus, they pose a poten­ tial threat to large volumes of groundwater if they are somehow intro­ duced into the subsurface. Increased production of chemicals implies the increased risk of accidental spills or leakage to the soil, and indeed, the literature abounds with contamination case histories. 2 Incidences of petroleum contamination of groundwater have been documented by many authors. For example, see: Schwi11e (1967); Toms (1971); Guenther (1972); McKee, et!l (1912); Williams and Wilder (1971); Van100cke, et ~]-