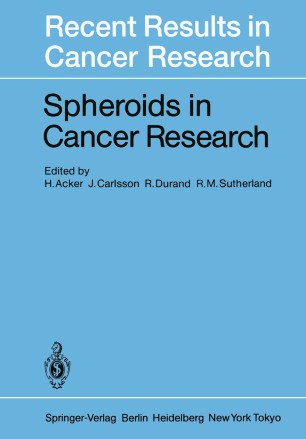 Malignant growth of cells is often characterized by disorganization of tissue structure, abnormal blood vessel development, and insuffi­ cient vascular supply. As a consequence, the cancer cells grow in a three-dimensional pattern in atypical microenvironments which include physical, chemical, and nutritional stresses. Necrosis often develops some distance away from the blood vessels. In association with an inherent instability in malignant cell populations, and also because of the changing micromilieu, significant cellular heteroge­ neity emerges with regard to various phenotypic characteristics. Both biological behavior and responses to therapeutic agents can be affected. A variety of in vitro and in vivo experimental models exist for research on properties of cancer cells during growth. The multicell spheroid model was developed as a system of intermediate complexity in which three dimensional growth of cells enhances cell-cell interactions and creates micro environments that simulate the conditions in intervascular microregions of tumors or microme­ tastatic foci. Spheroids may change their cellular characteristics with changing environments during growth. These can be studied under controlled conditions in vitro. Interest in details of experimental methods for this model system stimulated the organization of the First International Conference in Rochester, NY in 1980, the Proceedings of which were summarized in Cancer Research in 1981. Since then there has been a rapid increase in the use of this model system, and increased research on the significance of cell-cell and cell-microenvironment interactions in biology in general.