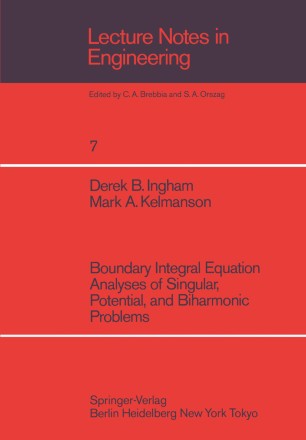 Harmonic and biharmonic boundary value problems (BVP) arising in physical situations in fluid mechanics are, in general, intractable by analytic techniques. In the last decade there has been a rapid increase in the application of integral equation techniques for the numerical solution of such problems [1,2,3]. One such method is the boundary integral equation method (BIE) which is based on Green's Formula [4] and enables one to reformulate certain BVP as integral equations. The reformulation has the effect of reducing the dimension of the problem by one. Because discretisation occurs only on the boundary in the BIE the system of equations generated by a BIE is considerably smaller than that generated by an equivalent finite difference (FD) or finite element (FE) approximation [5]. Application of the BIE in the field of fluid mechanics has in the past been limited almost entirely to the solution of harmonic problems concerning potential flows around selected geometries [3,6,7]. Little work seems to have been done on direct integral equation solution of viscous flow problems. Coleman [8] solves the biharmonic equation describing slow flow between two semi infinite parallel plates using a complex variable approach but does not consider the effects of singularities arising in the solution domain. Since the vorticity at any singularity becomes unbounded then the methods presented in [8] cannot achieve accurate results throughout the entire flow field.