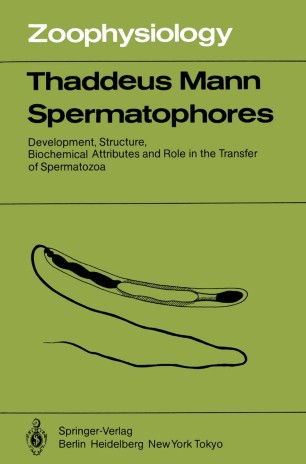 Development, Structure, Biochemical Attributes and Role in the Transfer of Spermatozoa

Physiology and biochemistry of male reproductive function and semen became the main area of my research in 1944, after my attention was finally diverted frorp. animal cells in general, to mammalian spermatozoa specifically~ Ever since, the interest has remained largely focussed on reproductive probletns in mammals, the work continuing mostly at the University of Cambridge, where I was privileged to hold also the Marshall­ Walton Professorship in Physiology of Reproduction. This work led to the publication of three books, The Biochemistry of Semen (Methuen 1954), The Biochemistry of Semen and of the Male Reproductive Tract (Methuen 1964) and lately, in co­ authorship with my wife, Dr. Cecilia Lutwak-Mann, Male Re­ productive Function and Semen - Themes and Trends in Phys­ iology, Biochemistry and Investigative Andrology (Springer­ Verlag 1981). In 1960, thanks to the Lalor Foundation, I was able to avail myself for the first time of a chance to visit the Marine Biological Laboratory at Woods Hole and there to take part in a study of reproduction in marine animals. Ever since, first as Visiting Professor of Biology at the State University of Florida, and later as the Walker Ames Professor and frequent visitor to the Department of Zoology at the University of Washington in Seattle, it has been my good fortune to sustain this pew interest and to pursue it further.