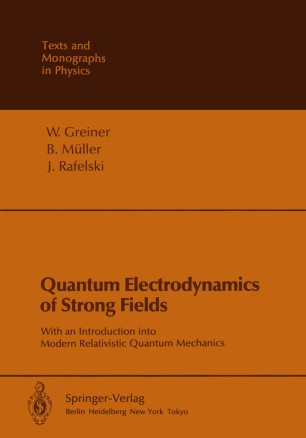 With an Introduction into Modern Relativistic Quantum Mechanics

The fundamental goal of physics is an understanding of the forces of nature in their simplest and most general terms. Yet there is much more involved than just a basic set of equations which eventually has to be solved when applied to specific problems. We have learned in recent years that the structure of the ground state of field theories (with which we are generally concerned) plays an equally funda­ mental role as the equations of motion themselves. Heisenberg was probably the first to recognize that the ground state, the vacuum, could acquire certain prop­ erties (quantum numbers) when he devised a theory of ferromagnetism. Since then, many more such examples are known in solid state physics, e. g. supercon­ ductivity, superfluidity, in fact all problems concerned with phase transitions of many-body systems, which are often summarized under the name synergetics. Inspired by the experimental observation that also fundamental symmetries, such as parity or chiral symmetry, may be violated in nature, it has become wide­ ly accepted that the same field theory may be based on different vacua. Practical­ ly all these different field phases have the status of more or less hypothetical models, not (yet) directly accessible to experiments. There is one magnificent ex­ ception and this is the change of the ground state (vacuum) of the electron-posi­ tron field in superstrong electric fields.