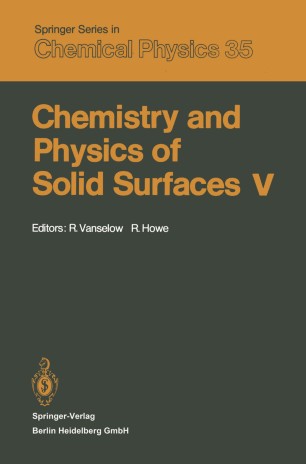 This volume contains review articles which were written by the invited speak­ ers of the Sixth International Summer Institute in Surface Science (ISISS), held at the University of Wisconsin-Milwaukee in August 1983. The objective of ISISS is to bring together a group of internationally recognized experts on various aspects of surface science to present tutorial review lectures over a period of one week. Each speaker is asked, in addi­ tion, to write a review paper on his lecture topic. The collected articles from previous Institutes have been published under the following titles: Surface Science: Recent Progress and Perspectives, Crit. Rev. Solid State Sci. 4, 124-559 (1974). Chemistry and Physics of Solid Surfaces, Vol. I (1976), Vol. II (1979), Vol. III (1982) (CRC Press, Boca Raton, FL), and Vol. IV (1982), Springer Ser. Chern. Phys. , Vol. 20 (Springer-Verlag Berlin, Heidelberg, New York 1982) No single collection of reviews (or one-week conference for that matter) can possibly cover the entire field of modern surface science, from heter­ ogeneous catalysis through semiconductor surface physics to metallurgy. It is intended, however, that the series Chemistry and Physics ofSolid Sur­ faces as a whole should provide experts and students alike with a comprehen­ ve set of reviews and literature references on as many aspects of the subject as possible, particular emphasis being placed on the gas-solid interface. Each volume is introduced with a historical review of the devel­ opment of one aspect of surface science by a distinguished participant in that development.