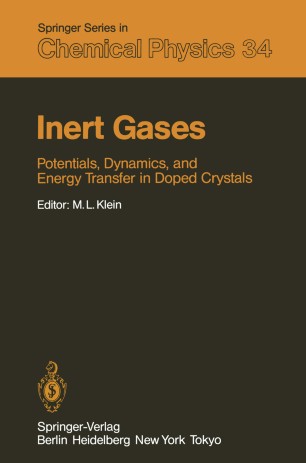 Research involving the chemical physics of the inert or rare gases continues unabated. This small volume is meant to deal with advances that have occurred in three selected areas over the past decade. It forms a natural outgrowth of earlier reviews and volumes that have dealt almost exclusively with pure rare-gas solids. Originally, a single chapter was envisaged to cover the topic of alloys and impurities in solid rare gases. However, over the past ten years this single chapter spawned many offshoots and eventually the project became too large for a single volume. Thus the present book contains only a small subset of possbile topics involving rare-gas solids intentionally doped with impurities. Chapter 1 gives a brief overview of current research devoted to the rare gases. This is followed by a comprehensive, self-contained chapter dealing with the most recent developments in the area of interatomic inter­ actions. Chapter 3 is concerned with the lattice dynamics of rare-gas solids doped with an impurity which is either another rare-gas or a small molecule. The final chapter deals with the spectroscopy of vibrating and rotating di­ atomic impurities in rare-gas solids. The birth of this volume was not without its labour pains. I should like to take this opportunity to thank the various people who have at one time or another been involved throughout its gestation period. Clearly, many important topics are omitted from this volume.