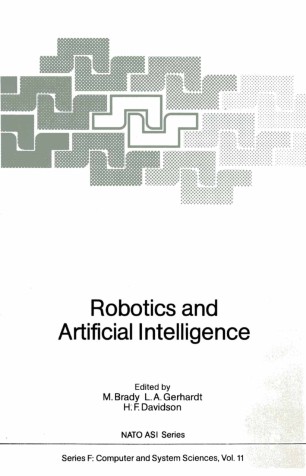 Dr. Lester A. Gerhardt Professor and Chairman Electrical, Computer, and Systems Engineering Rensselaer Polytechnic Institute Troy, New York 12180 This book is a collection of papers on the subject of Robotics and Artificial Intelligence. Most of the papers contained herein were presented as part of the program of the NATO Advanced Study Institute held in June 1983 at Castel vecchio Pascoli, Italy on the same subject. Attendance at this two week Institute was by invitation only, drawing people internationally representing industry, government and the academic community worldwide. Many of the people in attendance, as well as those presenting papers, are recognized leaders in the field. In addition to the formal paper presentations, there were several informal work­ shops. These included a workshop on sensing, a workshop on educational methodology in the subject area, as examples. This book is an outgrowth and direct result of that Institute and includes the papers presented as well as a few others which were stimulated by that meeting. A special note is the paper entitled "State-of-the-Art and Predictions for Artificial Intelligence and Robotics" by Dr. R. Nagel which appears in the Introduction and Overview chapter of this book. This paper was originally developed as part of a study for the United States Army performed by the National Research Council of the National Academy of Science and published as part of a report entitled "Applications of Robotics and Artificial Intelligence to Reduce Risk and Improve Effectiveness" by National Academy Press in 1983.