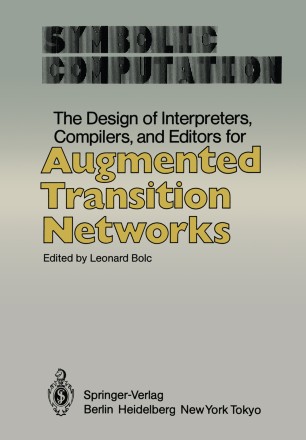 The Design of Interpreters, Compilers, and Editors for Augmented Transition Networks

Augmented Transition Network Grammars are at present the most widely used method for analyzing natural languages. Despite the increasing po­ pularity of this method, however, no extensive papers on ATN-Grammars have been presented which would be accessible to a larger number of per­ sons engaged in the problem from both the theoretical and practical points of view. Augmented Transition Networks (ATN) are derived from state automata. Like a finite state automaton, an ATN consists of a collection of la­ beled states and arcs, a distinguished start state and a set of distin­ guished final states. States are connected with each other by arcs crea­ ting a directed graph or net. The label on an arc indicates a terminal symbol (word) or the type of words which must occur in an input stream to allow the transition to the next state. It is said that a sequence of words (or sentence) is accepted by such a net if there exists a se­ quence of arcs (usually called a path), connecting the start state with a final state, which can be followed to the sentence. The finite state automaton is then enriched by several facilities which increase its computational power. The most important of them permits some arcs to be labeled by nonterminal rather than terminal symbols. This means that the transition through such an arc is actually the re­ cursive application of the net beginning with a pointed state.