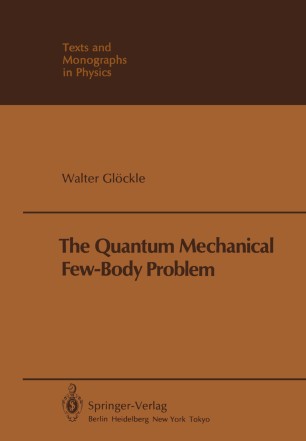 Few-body systems are both technically relatively simple and physically non­ trivial enough to test theories quantitatively. For instance the He-atom played historically an important role in verifying predictions of QED. A similar role is contributed nowadays to the three-nucleon system as a testing ground far nuclear dynamics and maybe in the near future to few-quark systems. They are also often the basic building blocks for many-body systems like to some extent nuclei, where the real many-body aspect is not the dominant feature. The presentation of the subject given here is based on lectures held at var­ ious places in the last ten years. The selection of the topics is certainly subjec­ tive and influenced by my own research interests. The content of the book is simply organized according to the increasing nu mb er of particles treated. Be­ cause of its conceptual simplicity single particle motion is very suitable for in­ troducing the basic elements of scattering theory. Using these elements the two-body system is treated for the specific case of two nucleons, which is of great importance in the study of the nuclear interaction. Great space is devoted to the less trivial few-body system consisting of three particles. Again physical examples are taken solely from nuclear physics. Finally the four­ particle system is discussed so as to familiarize the reader with the techniques required for the formulations of n-bodies in general.