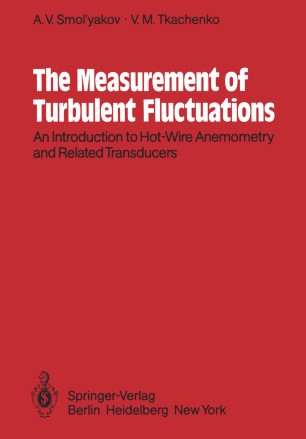 The Measurement of Turbulent Fluctuations

An Introduction to Hot-Wire Anemometry and Related Transducers

Smol'yakov and Tkachenko's book is a very thorough and detailed survey of the response of hot wires and related trans­ ducers to a fluctuating flow field. Now that the electronic equipment needed for hot-wire anemometry is so easy to make or cheap to buy, transducer response is the most critical part of the subject - except for the fragility of the sensing element , for which textbooks are no remedy! We hope that this book will be useful to all students and research workers concerned with the theory or practice of these devices or the interpretation of results. Peter Bradshaw Imperial College London v Preface "The importance of experimental data and of experimentally established general properties is often underestimated in the study of turbulence . . . •. The most direct path is to use experimentally established properties as the foundation upon which models explaining these properties can be constructed. " M. D. Millionshchikov Turbulence belongs to a class of physical phenomena that are very frequently encountered in both nature and technology. It is the most common and also the most complicated form of motion of real liquids and gases. It is observed in the oceans, in the atmosphere, and in a very wide range of systems in engineering. The rational design of airplanes, rockets, ships, dams, hydroelectric plant, canals, turbines, ventilators, and many other technological systems must involve the consideration of turbulence.