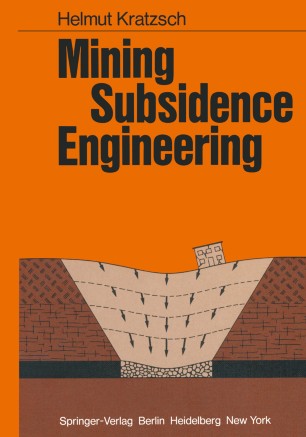 This book originally appeared in German in 1974, under the title "Bergschadenkunde" (mining subsidence engineering), and then in Russian in 1978, published by Nedra of Moscow. When the German edition was almost out of print, Springer-Verlag decided to bring out a new edition, this time in English. For this English version the text has been thoroughly revised, enlarged, and sup­ plemented by over 100 new figures. The book deals with the current state of international knowl­ edge on strata and ground movement over mine workings, with its damaging effects on mine shafts and the land surface, and with measures for regulating mining damage in law and reducing it in practice. Discussion begins with the mine excavation underground - the cause - and ends with the damage to surface structure- the effect. Methods of roof control, including the subject of rock bursts, are not discussed, since that is a field concerned more with the safety of underground workings than with minimizing damage at the surface. Of the 500 literature references in the German edi­ tion, only the more important for an international readership have been retained, but no value judgement on the many pUblica­ tions not mentioned should be read into this. The book is principally intended as a working aid for the mine surveyor, the mining engineer, the architect, and the civil engineer. For the student and the post-graduate researcher, it of­ fers a summary and guide to this whole field of knowledge.