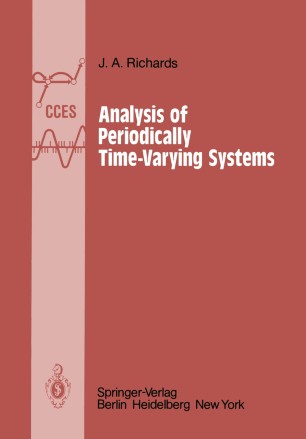 Many of the practical techniques developed for treating systems described by periodic differential equations have arisen in different fields of application; con­ sequently some procedures have not always been known to workers in areas that might benefit substantially from them. Furthermore, recent analytical methods are computationally based so that it now seems an opportune time for an applications-oriented book to be made available that, in a sense, bridges the fields in which equations with periodic coefficients arise and which draws together analytical methods that are implemented readily. This book seeks to ftll that role, from a user's and not a theoretician's view. The complexities of periodic systems often demand a computational approach. Matrix treatments therefore are emphasized here although algebraic methods have been included where they are useful in their own right or where they establish properties that can be exploited by the matrix approach. The matrix development given calls upon the nomenclature and treatment of H. D'Angelo, Linear Time­ Varying Systems: Analysis and Synthesis (Boston: Allyn and Bacon 1970) which deals with time-varying systems in general. It is recommended for its modernity and comprehensive approach to systems analysis by matrix methods. Since the present work is applications-oriented no attempt has been made to be complete theoretically by way of presenting all proofs, existence theorems and so on. These can be found in D'Angelo and classic and well-developed treatises such as McLachlan, N. W. : Theory and application of Mathieu functions.