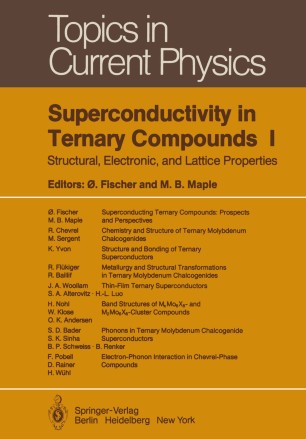 Superconductivity in Ternary Compounds I

The structural. electronic and lattice properties of superconducting ternary com­ pounds are the subject of this Topics volume. Its companion volume (Topics in Cur­ rent Physics. Volume 34) deals primarily with the mutual interaction of supercon­ ductivity and magnetism in ternary compounds. These two volumes are the culmination of a project. started nearly two years ago. that was inspired by the intense re­ search effort. both experimental and theoretical. then being expended to explore and develop an understanding of the remarkable physical properties of ternary super­ conductors. Research activity on this subject has increased in the meantime. The interest in ternary superconductors originated in 1972. when B.T. Matthias and his co-workers first discovered superconductivity in several ternary molybdenum sulfide compounds that had been synthesized in 1971 by R. Chevrel. M. Sergent. and J. Prigent. The superconducting critical temperature Tc of one of the compounds. PbMo S • was reported to be ~ 15 K. This value is sufficiently high that there was g 6 (and still is) reason to expect that other ternary compounds would be found with superconducting transition temperatures rivaling those of the A15 compounds. of which Nb Ge has the record high Tc of 23 K. The interest in ternary superconductors 3 received further impetus when several of the ternary molybdenum sulfides were found to have exceptionally high upper critical magnetic fields. some of them in the neighborhood of 50 Tesla or more. An immense amount of research on ternary molybdenum chalcogenides then followed.