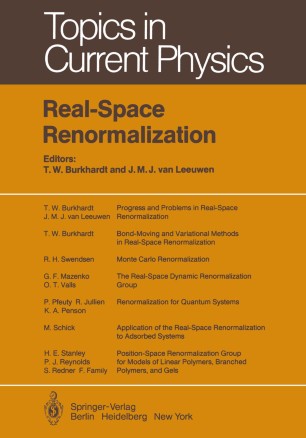 The renormalization-group approach is largely responsible for the considerable success which has been achieved in the last ten years in developing a complete quantitative theory of phase transitions. Before, there was a useful physical picture of phase transitions, but a general method for making accurate quantitative predictions was lacking. Existent theories, such as the mean-field theory of Landau, sometimes reproduce phase diagrams reliably but were known to fail qualitatively near critical points, where the critical behavior is particularly interesting be­ cause of its universal character. In the mid 1960's Widom found that the singularities in thermodynamic quanti­ ties were well described by homogeneous functions. Kadanoff extended the homogeneity hypothesis to correlation functions and linked it to the idea of scale invariance. In the early 1970's Wilson showed how Kadanoff's rescaling could be explicitly carried out near the fixed point of a flow in Hamiltonian space. He made the first practical renormalization-group calculation of the flow induced by the elimination of short-wave-length Fourier components of the order-parameter field. The univer­ sality of the critical behavior emerges in a natural way in this approach, with a different fixed point for each universality class. The discovery by Wilson and Fisher of a systematic expansion procedure in E for a system in d = 4 - E dimen­ sions was followed by a cascade of calculations of critical quantities as a function of d and of the order-parameter dimensionality n.