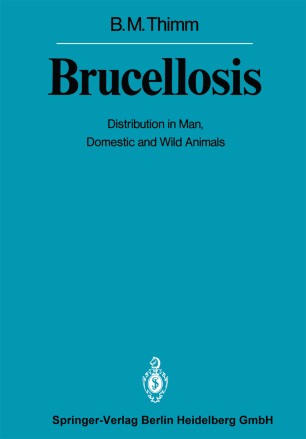 rope it was mainly the states of the northern and centrat European areas which succeeded in achieving the extermi­ nation or at least the regression of brucellosis. (The origi­ nal plan to present the conditions in Asia and Oceania, in­ cluding Australia, in maps as weil, and thereby to achieve a comprehensive worldwide review of the known and as­ certainable distribution of brucellosis, was not, however, practicable. ) Information available from these parts of the world, especially from Asia, is so fragmentary that the great expense required for the compilation of the map did not seem justified. On the other hand it seemed desirable to collate and document these data which had been ac­ quired as a basis for future research. It is tobe hoped that, at a later date, when more comprehensive data become available, the Heidelberg Academy will be able to decide to support a cartographic presentation of the occurrence of brucellosis in these parts of the world as weil. Last, but not least, the intensive research carried out by bacteriologists had led to the discovery of new species of Brucella, such as B. ovis, B. canis and B. neotomae. Further types - such as Type 4 of B. suis which occurs in reindeer and caribou - were identified. Though these new species and types, which are undoubtedly to be classed with the brucellae, have achieved regional significance in places, the three dassie species B. melitensis, B. abortus and B.