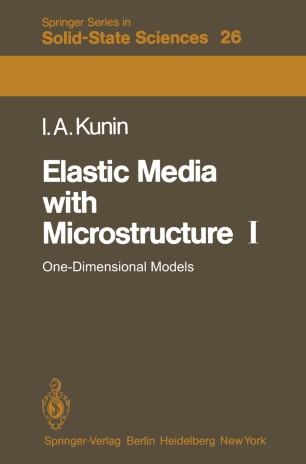 Elastic Media with Microstructure I

Crystals and polycrystals,composites and polymers, grids and multibar systems can be considered as examples of media with microstructure. A characteristic feature of all such models is the existence of scale parameters which are connected with micro­ geometry or long-range interacting forces. As a result the corresponding theory must essentially be a nonlocal one. The book is devoted to a systematic investigation of effects of microstructure, inner degrees of freedom and nonlocality in elastic media. The propagation of linear and nonlinear waves in dispersive media, static problems, and the theory of defects are considered in detail. Much attention is paid to approximate models and limiting tran­ sitions to classical elasticity. The book can be considered as a revised and updated edition of the author's book under the same title published in Russian in 1975. The frrst volume presents a self-con­ tained theory of one-dimensional models. The theory of three-dimensional models will be considered in a forthcoming volume. The author would like to thank H. Lotsch and H. Zorsky who read the manuscript and offered many suggestions.