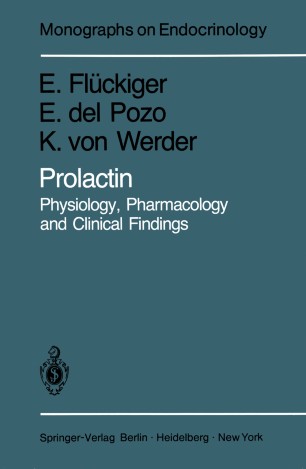 Part of the Monographs on Endocrinology book series (ENDOCRINOLOGY, volume 23)

Lactogenic hormone activity was first observed in bovine pituitary extracts by Stricker and Griiter in 1928, working in Bouin's laboratory in Strasbourg. Since that time prolactin has been shown to exist in anterior pituitary extracts of almost all vertebrate species investigated. Although its biology was extensively studied in many mammalian species, the existence of prolactin in the human was generally doubted, despite the positive evidence produced by such researchers as Pasteels. This can partly be explained by the fact that human growth hormone isolated in 1961, is itself a potent lactogen, in contrast to nonprimate growth hormones, and is present in the normal human pituitary in much greater amounts than prolactin. As a result there was a lag of nearly 10 years until prolactin was unanimously accepted as a hormone of the human pituitary, separate from human growth hormone. In 1970 new bioassay techniques permitted the demonstration of prolactin bioactivity in the serum of postpartum women and galactorrhea patients, and chromatographic methods led to the isolation and purification of human prolactin allowing the establishment of a specific radioimmunoassay for this hormone. This opened the road to the understanding of prolactin physiology and pathophysiology in the human, which has revolutionized clinical neuroendocrinology and reproductive endocrinology. Particularly hyperprolactinemia has turned out to be one of the most common endocrine syndromes.