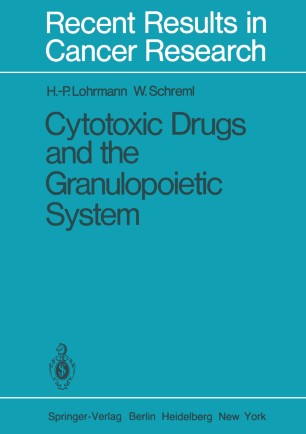 Cytotoxic Drugs and the Granulopoietic System

Since cytotoxic drugs were first developed, their damaging effects on bone marrow have attracted considerable interest. We now know that the bone marrow is an organ with rapid cell renewal in which maintenance of the steady-state depends on a high rate of cell production, and that the bone marrow toxicity of cytotoxic agents can be explained by the perturbation of such steady-state conditions. Experimental researchers have analysed in detail the effects of cytotoxic agents upon defined hematopoietic cell populations to define the mechanism of action and the location within the cell cycle at which cytotoxic drugs exert their cytocidal action. From such studies, a classification of cytotoxic agents according to their action upon cells during different phases of the cell cycle has been proposed [80-82]. Others have used the acute perturbation of the hematopoietic systems, caused by application of single high doses of cytotoxic agents, to analyse the patterns of depletion and reconstitution of the various hematopoietic compartments in an effort to shed light on the regulatory mechanisms that are responsible for the delicately balanced cell production of the hematopoietic cell renewal systems. A great deal of information on the structure of the hematopoietic systems has come from such studies, and kinetic parameters of these systems have been defined. To clinicians, the hematopoietic toxicity of antineoplastic agents has been an undesired though unavoidable side effect of almost all cytotoxic drugs introduced into clinical practice.