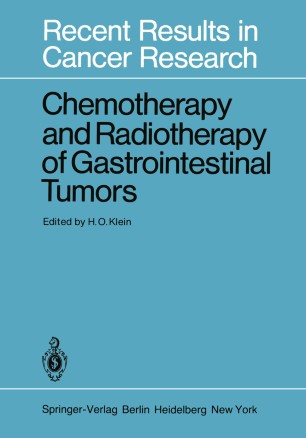 Chemotherapy and Radiotherapy of Gastrointestinal Tumors

Attempts to influence survival of patients with colorectal cancer (CRC) by adjuvant chemotherapy are limited by the variability of survival in different prognostic groups [4] and the paucity of drugs that have shown activity in the advanced disease [10]. Of the few drugs which are active in the advanced disease, only 5-fluorouracil (5-FU) and razoxane «±1,2-bis(3,4-dioxopiperazin-1-yl)propane) are suitable for long-term adjuvant treatment [2, 9]. 5-FU has been widely and intensively studied as adjuvant chemotherapy in CRC [7], but there is no unanimity that it has even the marginal influence on survival that has been claimed [3, 10]. Razoxane has not previously been tested for adjuvant or maintenance treatment in CRC. It has however a number of biological activities which might be thought useful in the treatment of residual or minimal tumours [1] and which might therefore make it useful as an adjuvant. Thus it specifically prevents tumour dissemination and metastases in some tumours and normalizes the neovasculature which the tumours induce [6, 8, 11]. The drug is not cytotoxic in the usual sense, does not affect non-dividing cells, and only blocks cell division during a brief period of the cell cycle in late G and/or early mitosis [12]. It does so non-selectively and most cells capable of 2 division examined so far have been affected by the drug. Even affected cells however are not destroyed immediately, but may increase in size and become multinucleate [5].