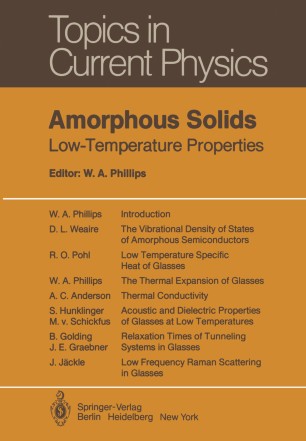 It is now ten years since it was first convincingly shown that below 1 K the ther­ mal conductivity and the heat capacity of amorphous solids behave in a way which is strikingly different to that of crystalline solids. Since that time there has been a wide variety of experimental and theoretical studies which have not only defined and clarified the low temperature problem more closely, but have also linked these differences between amorphous and crystalline solids to those suggested by older acoustic and thermal experiments (extending up to 100 K). The interest in this somewhat restricted branch of physics lies to a considerable extent in the fact that the differences were so unexpected. It might be thought that as the tempera­ ture, probing frequency, or more generally the energy decreases, a continuum de­ scription in which structural differences between glass and crystal are concealed should become more accurate. In a sense this is true, but it appears that there exists in an amorphous solid a large density of additional excitations which have no counterpart in normal crystals. This book presents a survey of the wide range of experimental investigations of these low energy excitations, together with a re­ view of the various theoretical models put forward to explain their existence and nature.