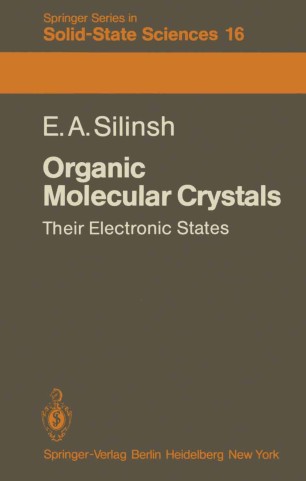 This book is based on the results of many years of experimental work by the author and his colleagues, dealing with the electronic properties of organic crystals. E. Silinsh has played a leading role in pOinting out the importance of the polarization energy by an excess carrier, in determining not only the character of the carrier mobility in organic crystals, but in determining the band gap and the nature of the all-important trapping site in these crystals. The one-electron model of electronic conductivity that has been so successful in dealing with inorganic semiconductors is singular­ ly unsuccessful in rationalizing the unusual physical properties of organic crystals. A many-body theory is required, and the experimental manifestation of this is the central role played by the crystal polarization enerqies in transferring the results obtained with the isolated molecule, to the solid. The careful studies of E. Silinsh in this field have shown tn detail how this polarization energy develops around the excess carrier (and also the hole-electron pair) sitting on a molecular site in the crystal. As with all insulators, trapping sites playa dominant role in reducing the magnitude of ~he current that can theoretically pass through the organic crystal. It is usually the case that these trapping sites are energetically distributed within the forbidden band of the crystal. For many years, an exponential distribution has shown itself to be useful and reasonably correct: However,' E.