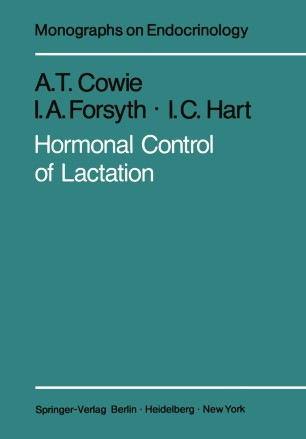 Part of the Monographs on Endocrinology book series (ENDOCRINOLOGY, volume 15)

Research on the hormonal control oflactation - the subject of this monograph - has long been the major interest of this laboratory. Studies were initiated in the mid 1930s by the late Professor S. 1. Folley, FRS, who directed the work with immense enthusiasm and devotion until his untimely death in 1970. This fruitful area of basic and applied research has, in recent years, attracted widespread attention; there have been many exciting events and developments with a dramatic increase in the number of publications. These events are diverse and include the identification, isolation and sequencing of human prolactin; the identification and isolation of placentallactogens in several ruminant species with recognition of their importance in mammary growth and differentiation; the introduction of highly sensitive bioassay, radioimmuno- and radioreceptor-assay techniques for mammotrophic hormones; the growing clinical appreciation of the immunological and nutritional importance of colostrum and milk to the newborn; the intensification of studies on normal mammogenesis to establish a sound basis for studies on mammary cancer; and the exploitation of the mammary gland, with its characteristic differentiation patterns and multiple synthetic abilities, as a valuable tissue for the investigation of basic mechanisms involved in the synthesis under hormonal control of enzymes and secretory proteins; and for the study of hormone - receptor interactions.