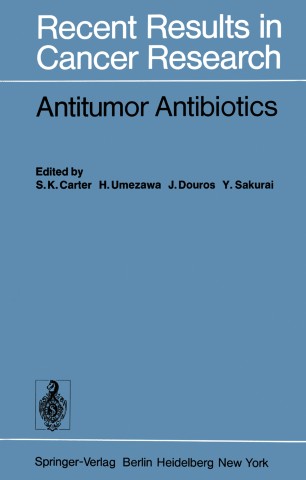 The scientific collaboration between the United States and Japan in the field of cancer goes back many years. In this successful international collaboration cancer chemotherapy has been one of the most productive areas. Pioneers such as YOSHIDA, UMEZAWA, SHEAR, and GOLDIN established firm links of mutual trust and respect in the period after the Second Great War. Japanese drugs, such as mitomycin C and bleomycin have become mainstays of clinical oncology in the U. S. and throughout the world. Many drugs developed in the U. S. have become established in Japanese cancer therapy. Within the cancer chemotherapy field the antitumor antibiotics rank as one of the most important groups. In the U . S. -J apanese collaboration this group of drugs has taken the paramount role. The Japanese, under the leadership of U mezawa, are considered to be among the most innovative and productive in this area which has also had great emphasis in the United States as part of the National Cancer Institute's drug development program and in the pharmaceutical industry. This extended collaboration in general oncology, and chemotherapy in particular, has received increased impetus by and support from the official U . S. -J apan Joint Agreement on cancer research, which was established in 1974 between the National Cancer Institute and the Japanese Society for the Promotion of Science. One of the subsections of this agreement is cancer therapy with emphasis on chemotherapy.