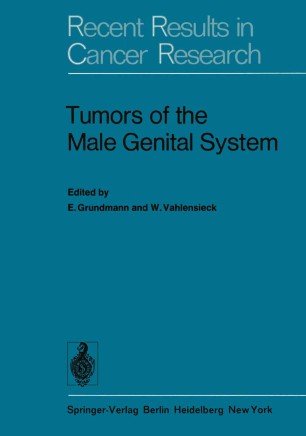 Tumors of the Male Genital System

E. GRUNDMANN, and W. VAHLENSIECK In recent years tumors of the male genital system have acquired a new scientific importance in many respects: First, epidemiologic studies have revealed a striking increase of prostate carcinoma in northwestern Europe and in the USA; it is now counted among the most frequent malig­ nant tumors in males. Geographic and ethnic distributions suggest that this tumor, too, may be triggered by exogenous factors of a still unknown nature. Histologic classification of malignant tumors of the prostate and testes has attained a certain finality, and the clinical relevance of the stages is recognized. Diagnosis by histology is now supplemented by aspiration biopsy cytology which offers a ready and reliable diagnostic potential. Its safety even surpasses that of punch biopsy histology and supports the qualification of cytology as a screening method. In the Federal Republic of Germany prostate carcinoma was recently included in the cancer prophylaxis program of the social insurance sys­ tem: Every man over 45 is entitled to one prophylactic free examination per year. Although the number of patients profiting from this opportu­ nity is still rather small, the number of patients is steadily growing who, as a result of this prophylactic examination, received medical treatment at an early stage of the disease and with a relatively better prognosis1 . Topical problems of social medicine are discussed in this context, as well as plans and developments of the social health service and of the supporting organizations, the federal societies for cancer campaign.